WHAT YOU NEED TO KNOW ABOUT MOTOR OIL - Expert's advice | Adeco

Production of engine and industrial oils and special fluids

WHAT YOU NEED TO KNOW ABOUT MOTOR OIL

Primary classification of motor oils is based on the type of engine it is used for:- for 4-stroke engines (petrol and diesel);- for 2-stroke engines;- for marine engines.

Based on the type of base oil, motor oils are categorized as:- Mineral;- Semi-synthetic;- Synthetic.

Synthetic base oil is produced by chemical synthesis of different components through various technological processes.

Semi-synthetic base oil is a mixture of mineral and base components, in various proportions.

Motor oils made from mineral base oils are cheaper, while those made from synthetic base oil are more expensive, but they have a better thermal stability, they facilitate an easier engine start and improve fuel economy.

According to their viscosity, motor oils are classified into single-grade and multigrade oils.

Single-grade oils are divided into winter and summer oils (they are marked, for example, 20W). Multigrade oils are intended for all seasons because they contain polymeric additives, most important being the viscosity index modifier. The oil viscosity designation is defined by the SAE J 300 standard.

The API specification is based on a two-letter code, prefix + suffix. The prefix may be S (for petrol engines) and C (for diesel engines). Suffixes are letters of the alphabet, starting with A, which labels the lowest quality, with the increasing quality corresponding to the increasing position of the letter in the alphabet.

The ACEA specification consists of a letter or letters that indicate the class (e.g. E stands for the heavy duty group class) and the number defining the category (e.g. 9 in E9). The higher the number in the suffix, the higher the quality of the engine oil is.

The quality of motor oils, besides the base oil, is influenced by the additive package, which means that additives are those that provide the true quality of motor oil. Additives used in motor oil production include: anti-foam, antiwear, EP, and corrosion inhibiting agents, as well as antioxidants, detergents, dispersants, and demulsifiers.

Motor oil for 2-stroke engines differs from engine oils for 4-stroke engines. Since the 2-stroke engine does not have an oil container, oil must be mixed with fuel, thus simultaneously lubricating the engine and burning together with the fuel. For this reason, motor oil must contain ashless additives, enabling its complete combustion without a formation of deposits on the engine spark plug, which results in engine failure. Instead of mineral oil, due to their better properties, semi-synthetic and synthetic oils are now increasingly used with 2-stroke engines. The 2-stroke engine oil viscosity is SAE 30 or SAE 40.

Motor oils for lubrication of marine engines (especially medium speed engines), due to the high sulphur content in fuel, have a large alkaline reserve, so the total base number (TBN) ranges from 80 to 120. 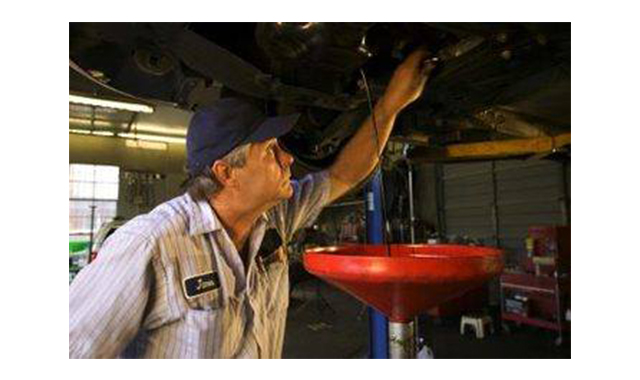